A borehole is a drilled hole mainly using a mechanical device. There are many different types of drilling machines which should be specified based on the geology beneath you.

There is the conventional drilling rig which we would associate to drilling. This is Auger drilling which is a helicoil which screws into the ground.

The next is the percussion rotary drilling rig. This drills into the ground and also has a hammer action which aids drilling. The end is usually a specially designed drill bit.

Cable tool drilling is a very old drilling technique and is best for a lot of type's geologies. This is a heavy tube on the end of a cable which is lifted up high and let go and when it hits the ground it drills into it. There is a flap within the tube which shuts when you lift it back up. It is perfect for sandy deposits but also works perfect in hard pebbly ground.

The Bore hole is usually between 2" - 12" in diameter and unlike a hand dug well usually very deep. A bore hole is very rarely less then 30 meters and can go as deep as 200meters.

Boreholes on average can produce a potable water supply which will require very little filtration. From 2003-2009 the UK government started rolling out drinking water regulations which forced many people who had been drinking straight from their borehole to add as a minimum a sediment filter and ultra violet light filter. They must have had a drinking water standards regulations water test done to see if any other filtration was required. This was to stop deaths caused by water contamination and bacteria growth. Water may look clear but bacteria can still grow and multiply within it in a very short space of time.

Ground water has been dramatically contaminated by farming, chemical spills, waste disposal and general ground run off. Everything you can imagine that is on the floor and gets wet when it rains gets soaked up by the ground, it runs straight into the ground water source and contaminates it, leaving our water supply dangerous. This includes mains water supplies which come from a borehole in most areas. The mains water suppliers combat the contamination by adding more chemicals because trying to remove them would be far too expensive.

We can cap artesian boreholes to stop them flowing and we can connect and direct the water in many different ways. 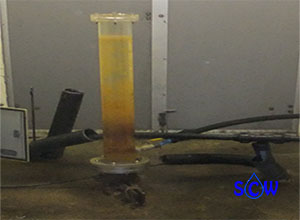